I was reading the history of normalnonoobs.com and realized what a profound impact retired members of the past have made on the Worms Armageddon community. But those legends are gone now and a new group of us is here, standing on the shoulders of those giants.

With the number of WA players dwindling, I think it’s time for the new NNN to revamp and revitalize the Worms Armageddon community! 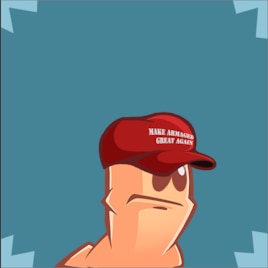 Here is my vision:

1. New goal of normalnonoobs.com = get players to sign-up
a. WHY? Because WA players involved in a league and community are much more likely to stick with WA. Ranked games are more important than funners, and more fun. Ranked games track progress, a deep human need. Tournaments get people excited!
i. I think a good way to hook a potential newcomer is to compliment them on certain moves they make and talk about our community of similar players that will help them to get better.
b. A problem : I play new players everyday that are good, but have never heard of normalnonoobs.com or tus-wa.com or CWTsite.com. I think if they had, they would be more invested and stick around longer with Worms Armageddon.

2. How?
a. We need to make it a rule of each normalnonoobs.com player to seek out and invite new players to the league. Pavel has been doing a good job at this. A good goal would be to have at least 15 active players by the end of this season.
b. A wheat snooper account always logged in named : ‘Sign-Up-ONL or ‘ONL-Tryouts
i. ‘Sign-Up-ONL away message, “Hi there! We are glad you are interested in joining the normalnonoobs.com league. We have several active players, ranked seasonal matches, tips & tricks, play-offs, tournaments and more! It’s a lot of fun. Check it out at normalnonoobs.com/newcomer
ii. ‘ONL-Tryouts, “Hi there! If you would like to join an awesome WA community, play in tournaments and ranked games, start sharpening your intermediate scheme skills! We host tryouts every Saturday at 4 pm EST. Learn more at normalnonoobs.com/tryouts” – This would require someone to admin the try-outs and the goal would be to get everyone to join.
c. We should give a .gif reward to a players profile anytime they get a new player to join the site and that player is active for 1 season. As part of the sign-up process we would ask users how they heard of normalnonoobs.com
d. Simplifying the sign-up process.
i. Right now it is a tiny font “new here?”. That is hard to see and not very catchy. New here? Could take the place of where home is located on the top navigation with a fun image of a smiling worm to be more inviting. Then when they click it we need a better landing page. A tiny “rules” link is what we have now, it is outdated.
1. The current newcomers page has a huge block of strike-out text and then a story about our history which I doubt anyone reads.
2. The history is important, but let’s just put a link to it. All of that text can be intimidating to a new player. Let’s give them the essentials of what they need to get started.
a. Sign-up
b. Quick Rules: Which I’d like to review these with you and simplify them too.
c. Have fun!
e. Maybe one of us could make a short 3-minute video inviting them to sign-up

Gentleman, Worms Armageddon is the greatest game of all time. It is up to us to save it, to keep the online community active, so that it will still be here in 50 years and our grandchildren can enjoy it.

Let me know If you’d like me to help re-design these aspects on the website, I have some web development skills.

PS. If you didn’t know there is a limited time Worms T-shirt for sale, I ordered and can’t wait to get mine.

Good post buddy, we really need new league players, and I try to invite as many people as possible to us, without new players the league can die completely. And also I agree that we need to place a message for beginners on the main page of the site, which will contain all the necessary information.
Top

WMD may be a good place to find new players. I was talking to Yungiz, who said he found us after playing WMD and wondering if there was a community online. Instead of a WMD community he first found tus-wa.com and now normalnonoobs.com.

Maybe we all start commenting on the WMD steam community page.
Top

The best way to attract new players is to play a couple of rounds with them and then you can invite them to us. Outside the game, the best way to draw attention to the game is YouTube ( I was already thinking about creating a video about the best shots of NNN members )
Top

I agree that the site needs an easy visible "Newcommers" or "register" button (section).If I were a newcommer at the moment I would be looking for information for several minutes and not finding anything I would just leave the site.It might be also a good idea to make possible to use the chat by unregistered people as guests so they could ask for info this way.I think there wouldnt be much spam and would help the newcommers
Top

After being logged out I finally found the "New here?" button so its not that bad as i thought hehe.Well the idea of recruiting new players is good.Rafka is doing nice work.I also sometimes say about nnn if the player is good so he would get a challenge

I corrected the description at "newcomer" section, now there is no unnecessary text. But I cant add any further to this topic. I understand the "new here" is not the first thing to catch your attention... but how to compress it next the banner? And ideas in image?
I tried to set a snooper and set an "away" message, but when I wrote something to it with another account, it just wont send me the away message...
"gif reward", well it's a good idea, just somebody has to draw one, I'm out of graphical ideas

I dont want to remove the "history" part under registration.
Marketing... I used to ask good players to join or play when I met one. I always offered the site, but 99% never returned.... I honestly dont know how you guys are doing it